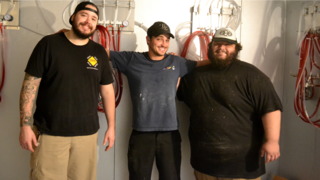 One morning in 2012, friends Andrew Buckenham and Lucas Rizor were about to head out to get supplies for their homebrewing operation. It had rained the night before, and one window was ajar in Buckenham’s truck; he warned Rizor, “Don’t sit there — you’ll get a soggy bottom!”

A few miles down the road, Rizor thought out loud, “Hey, that wouldn’t be a bad name for a brewery.” That’s how Soggy Bottom Brewing Co., set to be a new addition to Dunedin’s craft beer community in the coming year at 660 Main St., was born.

Rizor did wind up with a soggy bottom that day, but it was worth finding a name for their passion project. He, Buckenham and their pal Cary Lamb got to know each other while bartending around town. They discovered their common interest in brewing beer, which led them to start tinkering with recipes at home. Their beer quickly won the admiration of friends, family and neighbors. Once, Buckenham came home from a long day of work expecting to relax with a glass of home brew only to find that the neighbors had drank it all with his wife. It was an informal stamp of approval on their beer.

When the trio decided to make a go at opening a brewery, they considered a few locations in north Pinellas. But with 30 years of combined bartending experience — almost all of it downtown — the friends opted to stay where their regulars are in Dunedin, which provides a built-in crowd that’s used to seeing them behind the bar. According to Buckenham, coming from a bartending background and working with liquor has definitely influenced the way they approach beer. Most of all, they’re constantly thinking about how to please people with a wide variety of tastes and preferences. Determining what to brew is a collaborative process with the Soggy Bottom boys: The three friends sit down and hash out what they’re interested in trying. Then Rizor, Soggy Bottom’s head brewer, draws up the recipe and figures out how to make the draft materialize, while Buckenham and Lamb supply the elbow grease.

The trio had five signatures they launched with — a toasted coconut porter, blackberry hefeweizen, amber ale, black IPA and honey Kölsch-style ale. Buckenham said he his hope was to convert some folks that normally wouldn’t try beer. “People are surprised about the flavors that you can execute in a beer,” he said.

Soggy Bottom was the sixth brewery for downtown Dunedin, joining the likes of Dunedin Brewery, 7venth Sun Brewery, Dunedin House of Beer, Woodwright Brewing Co. and Cueni Brewing Co and Caledonia Brewing.  Next to Serendipity Café, Buckenham, Lamb and Rizor started leasing the future home of Soggy Bottom in May 2016. It was previously a location for Richard’s Foodporium, a Florida chain of health food stores. After some renovations and a change in décor, the brewery opened in early 2017. Now located next to Southern BBQ, the trio is celebrating their 3rd year of putting smiles on the faces of residents and visitors with their Passion for Craftin’!

Soggy Bottom has  a Prohibition, post-Depression theme, adding warmth and character to the industrial elements of the brewery. It has become a staple in the Dunedin community of Breweries and a treasured place to gather with friends.